Teknoto.Net - Free fire is one of the most popular battle royale games. Not only in Indonesia, but in all parts of the world. This is inseparable from the various advantages offered. For example, unique characters and cool skins.

In addition, the game model in free fire is relatively quite varied and has a light game capacity. So that it can be an attraction for gamers around the world. For those of you who are interested in becoming a pro FF player, here are some tips for you, including:

What are the tips that can be done to easily become a FF Pro Player? 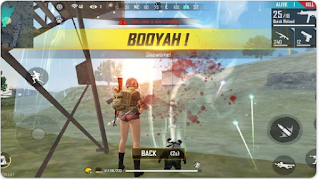 To play free fire, then make sure in this game you use a really capable device. If here you use a cellphone, try to use enough RAM capacity, and have a large memory. Also, make sure it has a high enough screen refresh rate.

The higher the refresh rate of a cellphone, the higher the response that can be generated. So that later the free fire game will certainly be smoother and more accurate. And it will be easier for you to become a pro player.

When you play this battle royale game, where you need to understand roles. The free fire itself also has several roles. For example, sniper, support, and so on. When you choose it, then choose the one that really suits your playing style.

If here you prefer combat at a distance, then it is better to choose an artist role and a suitable character in battle.

The choice of character certainly depends on the role, because each hero has different skills. This is very necessary for building a really strong team so that later you can become a professional FF pro player.

Use the Right Character

Free fire is a type of game that has a lot of characters in it that you can use, such as Alok, Kelly, Chroni, Wukong, and so on. The selection of the right character in the game will affect the course of the match.

These characters have passive skills as well as active properties that can be used. The selection of this skill needs to be adjusted to the role you are playing.

The last tip that you can do is that you have to increase your strategy practice. This is the most important step when you want to become a professional free-fire player. Practicing and strategizing in the game will increase your ability to play.

To add more strategies and ideas, you can watch the pro players on YouTube streaming. So that later you can apply it directly when you fight. In addition, you can also increase your flight hours by participating in tournaments and always evaluating errors that occur in each game. So that way your game will be much better from time to time.

0 Response to " Tips to Become a Pro FF Player"