Teknoto.Net - The PES game played on consoles or mobile is one of the types of games released by the same company, namely, Konami from Japan. This game is very popular in the market and is the main choice when people go to PlayStation rental places.

Meanwhile, playing PES on the console by playing PES on mobile is of course different, both in terms of graphics, appearance, player skills, and also the procedure for playing it. Playing the Pes game on mobile is considered more difficult than playing it using a PC or PlayStation directly.

In PES Mobile, players must carefully play the touch screen so that the ball can be controlled and passed in the intended direction. This is different if we play using a stick. The difference is the enjoyment is very different when you are not used to it. 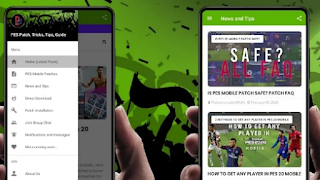 The PES mobile game itself has advantages, including because it can be played on a flexible smartphone when you have to carry it everywhere. In addition, this game can be downloaded for free. So, we can play PES without the need to spend money to buy PS in physical form.

Well, so that you are good and reliable when playing in this mobile PES. So there are some tricks you can do before starting this game, some of which are as follows:

What are the tricks that can be done for Pes Mobile Tricks?

Before you start playing the game, it's a good idea to first configure the extra menu -> settings -> main settings contained in the main menu. This is done with the aim of making you feel comfortable when playing.

The settings here include the cursor, directional stick, and automatic sledding to the brightness of the button you want. For the settings, please try them yourself one by one, then, adjust them to your liking.

After you do the configuration in the settings menu. If you are a beginner in playing PES mobile this one. So it's a good idea to use the practice or training menu first so that your hands are not stiff when playing PES Mobile.

Among the training skills that you can practice include the menu of passing, dribbling, shooting, how to catch up with opposing players, defending, or other training menus according to your needs.

The choice of formation needs to be adjusted to the style of play you want and also the choice of players available. If you want the game to attack, then you can use a 4-3-3 formation by placing wing attackers who have fast speed.

However, if you want a game that lasts. You can stack players at the back for example with a 5-3-2 or 5-4-1 formation. That way your defense will be solid and it's likely difficult for your opponent to break down. However, there is also an effect, namely, you will find it difficult when attacking when there are a lot of players piling up on the defensive line.

This PES mobile allows users to play with computer AI or other real players. The more you compete, the more knowledge you will get.

If you already feel comfortable using PES Mobile. After that, you can also practice new skills such as tricks to rub your opponent, tricks to get the ball into the goal with a chip or even fake shoots.