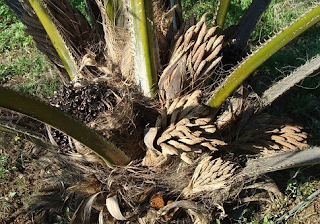 Agriculture - Oil palm has a very high economic value. Not surprisingly, in various regions in the archipelago, many vacant lands function as oil palm plantations. Sometimes some deliberately convert the land they own.

Indonesia alone controls 55% of the global palm oil market so Indonesia has been named the number 1 palm oil-producing country in the world. The countries that receive the most supply of palm oil from Indonesia include India, China, Pakistan, Bangladesh, and the United States.

However, apart from the benefits of growing oil palm. There are also failure factors that oil palm smallholders must avoid. Each plant requires its method and handling, as well as oil palm.

Sometimes the oil palm trunk turns yellow and then becomes dry, of course, must be anticipated by land managers so that later it will not cause losses when harvest time comes. The following are some of the causes of yellow and dry palm leaves, including:

1. Lack of Nutrients in Soil

To plant oil palm, you need land that has good nutrients. So a lack of this substance in the soil can later cause plants to grow less well, this is characterized by the growth of yellowing leaves which will then dry out.

At least palm trees need 12 kinds of elements a day consisting of potassium, nitrogen, phosphorus, sulfur, magnesium, magnesium, calcium, molybdenum, and so on.

If these substances are lacking, then the distribution of nutrient uptake throughout the tree is not optimal, the chlorophyll present in oil palm leaves is not properly maintained.

Therefore it is necessary to fertilize regularly so that the soil becomes fertile and has a lot of nutrient content. In this way, the yellowing of the leaves will gradually decrease by itself.

In some cases, the yellowing of oil palm leaves is caused by disease. This factor is generally caused by improper plant care, causing a fungus that causes the base of the tree trunk to rot, so of course, it also affects the leaves.

Several types of fungi often attack oil palm trees. Each fungal attack has a different negative effect, it can attack the stem, roots, or leaf bones which directly or indirectly affects the yellowing of the leaves.

There is also a disease called the yellow line. This is caused by Fusarium oxiysporum, which is a type of fungus that attacks the leaves directly. This disease can be seen on the leaves which are initially green and then interspersed with yellow fine lines. If left this will make the leaves will gradually become dry.

The last factor that causes oil palm leaves to turn yellow and dry is the slow growth of the tree. This could be due to several things that were previously mentioned. Such as care errors, lack of nutrients in the soil, and also fungal factors that attack some parts of the tree.

One more thing, besides fungi, sometimes pests such as caterpillars, beetles, and weeds also appeared. Good plant care determines the quality of the palm oil produced to match the planned production target from the beginning until the harvest period comes.

That was a brief article about the causes of yellow and dry palm leaves. Hopefully, this article is useful for all of your readers.

0 Response to " Causes of Yellow and Dry Palm Leaves"