CPU Problems that Often Occur and How to Solve Them

Teknoto.Net - CPU Problems that Often Occur and How to Solve Them, CPU is a name that stands for Central Processing Unit and is more familiarly called CPU to make it easier to pronounce. CPU itself is hardware or hardware in a computer that functions as a receiver and execution of commands and data processed from software. The computer CPU itself is the main part of the computer because it can regulate all computer activities, and if a problem occurs, it can affect the performance of the computer.

As for some of the problems on the CPU that often occur and the right way to solve them for you to do is, as below. 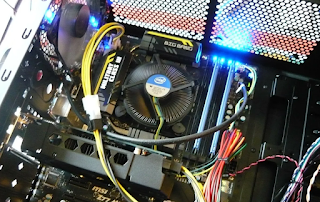 Frequently Occurring CPU Problems and How to Solve Them

This problem will generally show there is no display on the monitor, the indicator light is flashing or the front panel is lit, the processor is spinning but there is no beep sound and the power supply fan. And to overcome this, several ways must be done, namely:

• Also remove the screws that cover the casing and open and remove other components such as the power supply voltage cable to the mobo, HDD, Card, for example, VGA and Floppy

• Don't forget to also check the mobo, whether the mobo is safe and nothing is burned. If not, then the possibility of damage has occurred Due to a problem in the BIOS

Next is a problem with the CPU that emits long or repeated beeps. When turning on, generally the CPU will make a beep sound several times and there is no display on the monitor when in fact the monitor is in normal condition. This can also happen due to an error in the BIOS and generally, there is an error in the memory card that has not been detected or a problem with the VGA Card that is not good at the time of installation. Other causes can also be caused by the monitor data cable.

4. CPU Hang and Not Responding

The four CPUs that hang or are not responding usually often occur because they are caused by several factors including:

In addition, this problem is also often troublesome and the solution is, you have to check whether the windows system is damaged or not. In the CPU itself, you have to check on the memory section or the HDD or it could be from the components on other CPUs.

Those are just some of the problems that are often experienced by CPUs and the right solution to overcome them is the right one as the first step to help to reduce the problems with the problematic CPU That's all we ended, hopefully, useful and see you again.