Teknoto.Net - 7 Best Jedag Jedug Video Editing Applications, In the progress of this developing era, it is indeed the last time a video of pauses has gone viral on one of the TikTok video applications. So with the viral video, many people are interested in making it. 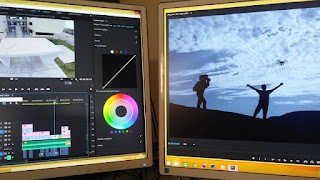 Well, if you are interested in making the video, now you don't need to be confused about looking for an application for editing the viral pause video. Because we will share the 7 Best Jedag Jedug Video Editing Applications that have advanced features, including the following.

Curious about which applications have pause and full music features? Let's just take a look at the reviews we have prepared below.

It's no stranger to hear the word Capcut, right! An application that makes it easier for creators to make video pauses. In this application, there are interesting features so that it can produce professional pause videos.

KineMaster is the world's most popular video editing app. This application can be used as an alternative tool to edit videos easily via Android smartphones. KineMaster itself is very superior for video editing because it has the ability not only to edit videos but can edit visual and audio effects and there are transitions and effects as well as stickers and fonts that can be downloaded for free in the application.

Alight Motion is after effects with the mobile version. For those of you who don't know, after effects, people usually call it a cool motion animation maker via PC. With that, now you can create cool motion graphics and animations only through smartphones. In addition, there are also features that you can use to adjust the beat of the song. That way, this feature can make it easier for you to make video pauses by following the beat of the music.

VN does sound quite foreign to your ears. However, VN itself is one of the most recommended applications for video editing that creates the perfect pause effect. The number of users who have downloaded VN has already reached millions of users. So don't be surprised if we recommend this application for you.

Glitch Cam is one of the most commonly used applications in video editing to combine with music parties. For editing results from this best application, it is no less slick with other popular applications. So it's not wrong if you choose Glitch Cam in making the video pause which is currently viral.

Motion Ninja is the best video editing application that has been downloaded by more than 1 million people. This application also has advanced features that can make the best jedag jedug videos in 2021. In order not to be curious, then you can try it yourself by downloading it via the play store.

Those are the 7 recommendations for the best video editing applications for pauses that you can download and try. Good luck, good luck.