Video Settings On Sony A6000 Camera

Teknoto.Net - Video Settings On Sony A6000 Camera - Stage video creation with SONY A6000 cameras like a movie theater or videos like a cinema screen. There are tips for learning to make videos with a SONY A6000 camera such as cinema films or cinema effects.

For camera settings with video recording 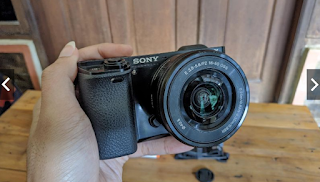 How is the process of making a video on the camera?

• Some cameras have a Movie Exposure setting. Low-end camera models generally have Auto Exposure and Exposure Lock, the principle is the same.

• Canon's SONY A6000 has a Movie Exposure setting, it is recommended to switch it to a manual setting. On low-end cameras, the exposure lock can be locked with a button (description in the video below).

• Video settings with 24 or 25 fps or 30fps. Set a frame rate before creating a video, and make all videos with the same frame rate.

• Movies shot at a frame rate of 50-60 fps will look more realistic but not for Cinema movie settings. For cinema films, it is enough to use a setting of 24 or 25 fps.

• Specify the size of the video, for example, one recorded in HD or Full HD 1080p, or maybe you have a camera with 4K capability as well.

• When taking videos indoors, and dealing with light. We recommend using the 25 fps setting. Since the frequency of lamps in Indonesia and Europe uses 50Hz, you can check it with a digital multimeter. For outdoor shots, use speeds above 25fps.

This is an important part because we just realized that an error occurred while taking a video image that turned dark, light, and dark after viewing it in the video editing software. One of the most important settings is when the camera captures objects with different light levels. For example from light and dark and back to light, considering that the SONY A6000 camera has an auto system and can interfere with the display of video images.

Focus on the camera when shooting video with SONY A6000

This part is the most difficult as a cameraman, especially for the SONY A6000 camera with the object moving towards the camera. Here only the capabilities of the lens and the camera hardware itself. Fast and slow autofocus when shooting motion pictures can only be handled by certain types of cameras. Usually using the Auto Focus 3D Tracker Mode system. Thus a review of the video settings on the Sony A6000 camera, hopefully, it will be useful.

0 Response to "Video Settings On Sony A6000 Camera"