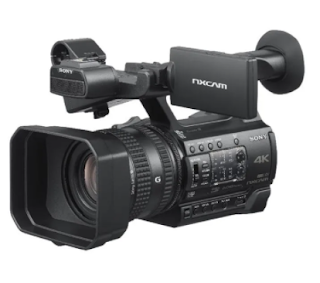 Tekinoto.net - Types of Video Cameras - Video image recording devices are capable of storing digital images from analog picture mode. The video camera is a product of digital technology, so it is also called a digitizer device that can take analog data input in the form of light frequencies and convert it into electronic digital mode.

In the '80s, Home Video Cameras started to become more and more popular. Many families whose livelihoods are sufficiently equipped with this camera as a means of family entertainment. Seeing the development of people who are so enthusiastic about entertainment whose own work can be watched on a television screen, the company with the rising sun flag, through its brand Sony Corporation, developed video 8 into Hi8 by sharpening the quality of images and cameras.

What Are the Types of Video Cameras?

Accessories such as adding a zoom lens can be used. Bring objects closer together, Wide lenses can expand the room to filter out lenses that can have interesting effects. By replacing these features. People who have a hobby of filming make their production more creative. Especially since the existence of computer graphics in the field of video editing has been circulating in the market, although still in analog format, the public is quite fond of it.

Consumption of this type of camera is only for home needs, meaning that the target user is limited to the family environment for special purposes such as travel, birthdays, circumcisions, or weddings. It is small, slim, light, and fits perfectly in the hand. The image quality produced by this camera is very limited for the production of VCD format video which has a frame size of 320 pixels X 240 pixels.

This picture frame size is only good for viewing on a 14 "television if you are watching it on a 29" television and above the picture is not good. Some versions complement the audio system from mono to stereo and are also equipped with an LCD screen to easily control the object of recording and when you want to playback the recording.

The electronics company that produces the most variations is the Sony brand, although other brands that are trying to produce them include Panasonic, JVC, Samsung, Philips, and Sanyo. Thus a review of the Types of Video Cameras may be useful.

0 Response to "Types of Video Cameras"