Teknoto.net - Sony A7 Camera Specifications - Sony is no stranger to innovation, with a seemingly relentless desire to be at the forefront of consumer technology. So it's not surprising that it's the first to hit the market with a compact system camera equipped with a full-frame sensor. 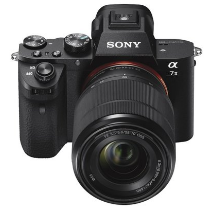 The A7 comes in two variants, one with a 24.3 million pixel sensor and another (A7R) with a higher resolution, a 36.4 million pixel sensor, and no anti-aliasing filter. As you might expect, the A7 is slightly cheaper than its unfiltered AA sibling. However, if you compare the two to other full-frame cameras on the market, it suddenly looks pretty good.

Along with the exciting new sensor, the Sony A7-type camera is equipped with a new processing engine. The Bionz X processor is claimed to be three times faster than its equivalent predecessor. There is also a new AF algorithm that offers a very fast autofocus speed.

What are the features of the A7 camera?

Other interesting features of this camera include dust and moisture resistance. While it's not completely waterproof, its moisture resistance will make it resistant to odd rains without too much trouble. It also comes with Wi-Fi and NFC connectivity, which means you can share images with your smartphone or tablet instantly, or use another device to remotely control the camera.

The Sony A7 and A7R are more or less unique in the market, so small and light, and of course mirrorless. However, when we talk about "entry-level" full-frame cameras, the A7 doesn't compete with the Nikon D610 and the Canon EOS 6D. It's cheaper, and certainly smaller, than the two options, making it attractive to those looking for their first attempt at full-frame shooting.

the price of the A7 camera

0 Response to "Sony A7 Camera Specifications"