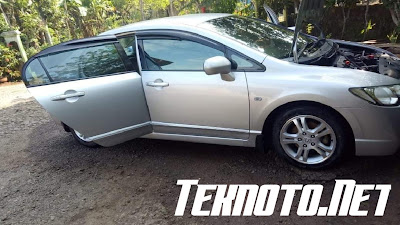 Teknoto.Net - When it comes to cars, sedans may be the type of car most people are interested in. How not, the sedan becomes one of the most interesting car classes of any other type of car. If in Indonesia we know him better by the name of the sedan,

The definition itself is a bak car that is equipped with various interesting features that will pamper its users. As a car with a high enough class, sedans can not escape from various problems and damage that are common. It is in this article that we will discuss the frequent damage to sedan cars.

Sedan itself includes a car that is intended for daily transportation needs because it has a minimalist body and also small. No wonder this car is equipped with abundant features to provide a sense of comfort to its users. Before deciding to buy a sedan car, perhaps you should know first what are the frequent damage to sedan cars.

Quite frequent damage to sedan cars is on the DVD Player section. Many factors cause DVD Player can be damaged either because it is used too often or because of the original way of use. Many people think that this is just small damage and can be repaired by yourself.

It was a very risky act. Because this DVD Player is related to the electrical system, so if wrong instead of going well it can even add damage to the DVD Player.

Radiators have become one of the most important components in the car. Radiators act as components of the car's engine cooling system. Where its function is to stabilize the temperature of the engine that is doing the combustion so that there is no overheating.

Damage to this radiator can not be handled alone, must be done by expert technicians. Because if wrong in installing radiators will adversely affect other engine components.

The fuel pump is a component that serves to pump fuel from the tank to the engine. This component rarely suffers severe damage. However, this fuel pump can experience blockages caused by dirt from the fuel tank or precisely from the use of less quality fuel. If this is the case then it must be cleaned immediately so as not to affect the performance of the engine.

In general, this transmission can be said to be a power transfer system that has. So that makes this component very often in use so it is not surprising if this component is the most often damaged. The cost of repairing the transmission itself is quite expensive, ranging from 2 - 3 million per transmission unit.

Damage to the Brakes

Brakes are also the most sensitive part of the car if not fixed immediately. Damage to the brakes not only ranges in bearings but also to other parts such as rotors, casters, and brake oil. So it takes expertise to repair damage in this part of the brakes.

So that's some of the damage that often happens to sedan cars. Even if you enter a luxury-class car, but if the maintenance is original then the risk of damage as above may occur. So that the car still looks good and does not suffer significant damage in need of maximum maintenance.