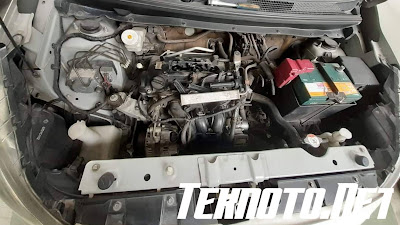 Teknoto.Net - The problem of used cars of course we often experience, I will discuss the 5 components of the car parts that are most often problematic, you can check out the following reviews so you know better and understand them.

A car is a type of vehicle that consists of a lot of components. If at any time you drive a car and there is a problem with the engine, it may be caused by damage to some components in it. While you're unlikely to fix it yourself, it's a good idea to know what components are often in trouble.

This is not only aimed at increasing knowledge about car components but also can prevent you from fraudulent actions that can be done by rogue workshop employees. This article will discuss what are the components of the car engine that are often problems that you must know.

Before looking for damaged components, it must be pleaded with knowledge of the functions of each component. So you can more easily find and find out which components are likely to be damaged. Well, below are some of the components that most often run into problems and you should pay attention to them.

Another component that also often has problems is spark plugs. A wearable spark plug can be seen from the shape of his head that has been damaged or stretched. If there is one spark plug that has problems, then you should immediately replace the entire spark plug. Because the other spark plugs must have conditions that are not much different from the damaged spark plugs and shortly will also experience damage.

Distributors have become one of the most important components in the car. Where the function of this one component is to supply ignition power to all module drive components in the engine circuit. If this power distribution process is not good then the machine will work abnormally. Therefore, if you experience damage, you must immediately repair it to keep the car powered.

It has the same function as the injection system which distributes fuel to the engine cylinder, but this carburetor still uses a different manual mechanism than the injection system that is already electronic. The cap set on the carburetor does not include components, only if the suit is too high then the carburetor valve can not close perfectly. As a result, the fuel supply to the engine cylinders will be too much.

Those are some of the engine components that often have problems. Although the above problems are not too big but can interfere with your trip. Therefore, fix it immediately before the damage propagates to other components.

#What are the most common car problems?,#What are some problems with cars?,#What are mechanical issues in a car?,#How often should car parts be replaced?

0 Response to "5 car part components that are often problematic"