signs of a bad car starter that you need to know 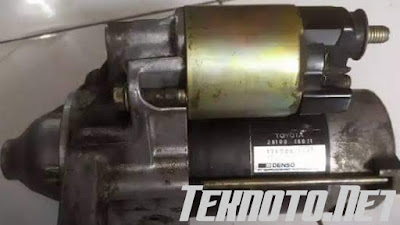 Teknoto.Net - Dynamo starter damaged in the car certainly makes us when driving will feel worried if there is a possibility of a car difficult to live and the car will crash on the road because the starter car does not go to the engine alive and resulting in a short battery.

This starter dynamo part component is one of the parts that is considered very important because the starter dynamo serves to start the car engine on the first time the engine is turned on by rotating the crankshaft of the engine through the flywheel.

a. Will make the car difficult to turn on first including at the time of parking.

b. Could cause your car battery to drop

c. The worst possible thing is that your car will crash because the battery is not working properly.

2. There are a rattling and sighing sound on the starter dynamo

This resulted in the armature shaft that was supposed to rotate the pinion gear instead of rotating itself so that the sound sighed.

Characteristics of the starter dynamo damaged next are the car difficult in the starter when the engine is hot, for example, the car is on its way and stops parking refueling or resting and at the time of going to travel arrive the car is difficult at the starter. the car engine will be difficult to turn on and rarely realized by the owner of the car because of the faulty starter dynamo.

4. The car engine does not want to turn on at the moment in the starter

If at the time of the dynamo starter there is a reaction then the possibility of dynamo starter of your car is problematic and you can check on the starter dynamo fuse that is likely broken or burned so that it can cause carbon brush and copper rolls to burn as well.

Conclusion: if your car engine has difficulty starter problems and the engine does not go life can be concluded the possibility of dynamo starter in your car is problematic or damaged.